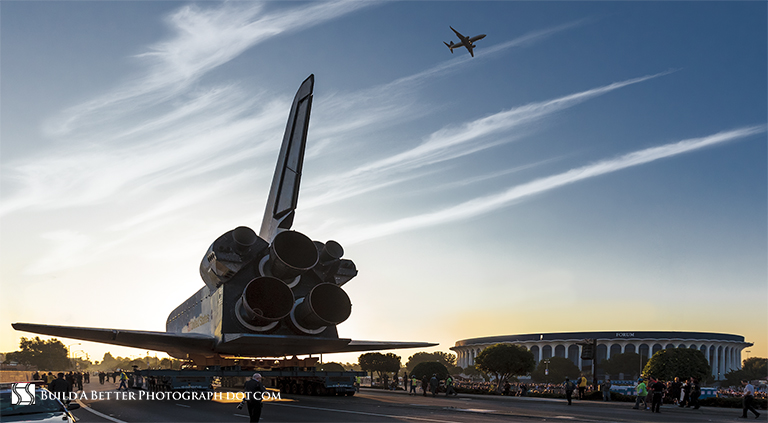 In the past when business was slow it was damn near impossible for me to self-motivate to shoot for my book. As I’ve aged and embraced the advantages of our digital age, I’ve fallen in love with the creative process of photography again. I look forward now to an empty pipeline in that if frees me to work on my portfolio. I have the luxurious problem now of finding time to interpret my visions.

I’ve give myself assignments like flash fill and indoor sports, available light long lens portraits, tilt-shift travel and time-lapse of just about anything. Shooting with my 5D, 5D MRKII, GoPro Hero 2’s and my iPhone, I’ve amassed gigabytes of new work. Coupled with my new found expertise in Lightroom and Premiere and I’m having a blast. I feel like a newbie!

I’ve always been one for taking a mundane subject and building a dynamic photograph from it. It’s comparatively easy to take something beautiful and make it more beautiful through the magic of photography, but I thrive the most when I photograph average subjects and turn them into something beautiful. Here’s a shot I made using my tilt-shift lens of a WWII submarine docked at Fisherman’s Wharf in San Francisco: 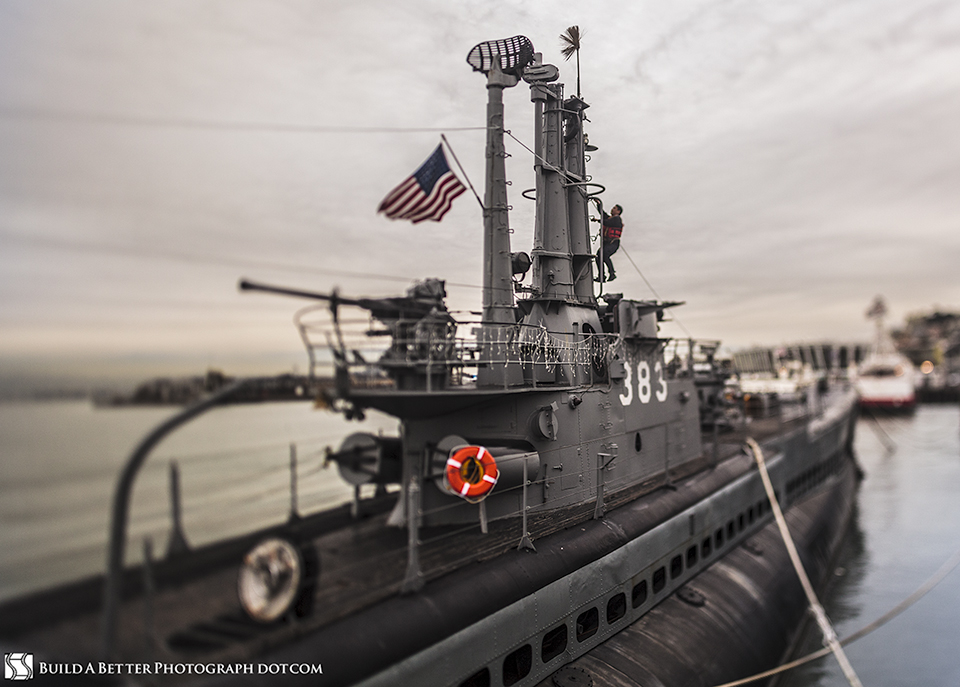 This is one of the core values of my career, pushing the limits to see what can be seen. I’ve always been this way, even back in my film days when photographing hundred’s of children’s toys and clothing for Disney, Applause, Universal Studios and Paramount. Sorry, I just had to name drop here….that was fun! But I digress….

The image at the top of this post is the completed image. Here is what came out of my camera. Essentially it’s all here, it just needs a little bit of this and that: 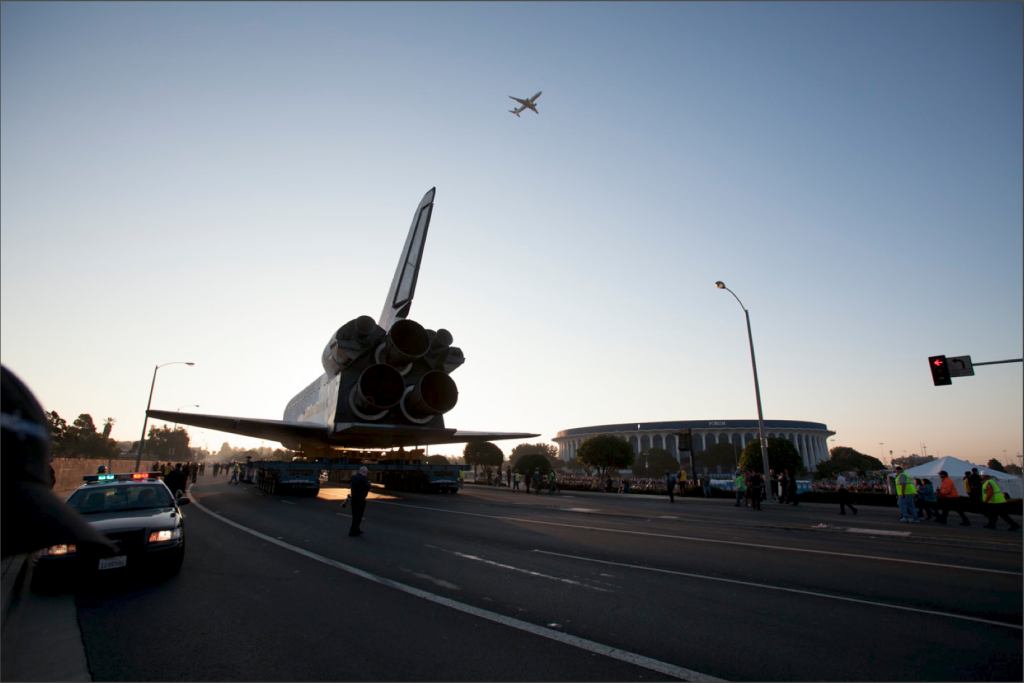 I arrived 2.5 hours early and scouted spots where I thought I’d get the best Endeavor and Forum view at the same time. This was crucial for two reasons: it gives context in terms of location and this image is being used as a marketing piece for a very specific purpose, something I call guerrilla marketing. Here’s the scenario: thousands of people were jockeying for position with their camera phones and dslr’s, pushing  and shoving, drinking hot chocolate, sitting on chairs, standing on cars and holding their children’s hands. And there I am with my MRKII, my 24mm tilt-shift, 24-105, 16-35 and my brand new 100-400. I found my spot, planted my flag and waited. When things lined up I took my shot. Several in fact because the jet meant I had a choice regarding its’ placement in the composition. I love it when a spontaneous event happens, it creates added pressure and makes it all the more exciting. You have to be present at this point in order to take advantage of the situation. If you’ve done your homework these things usually work out well. And the jet was a gift I wasn’t going to waste.

This frame had the jet in the right spot for the composition I envisioned. I didn’t care for the distortion but my 24mm tilt-shift was not wide enough so I switched to the 16-35. I’d prepared earlier with my lens choice and at this point I was just waiting for the sun to get into position. 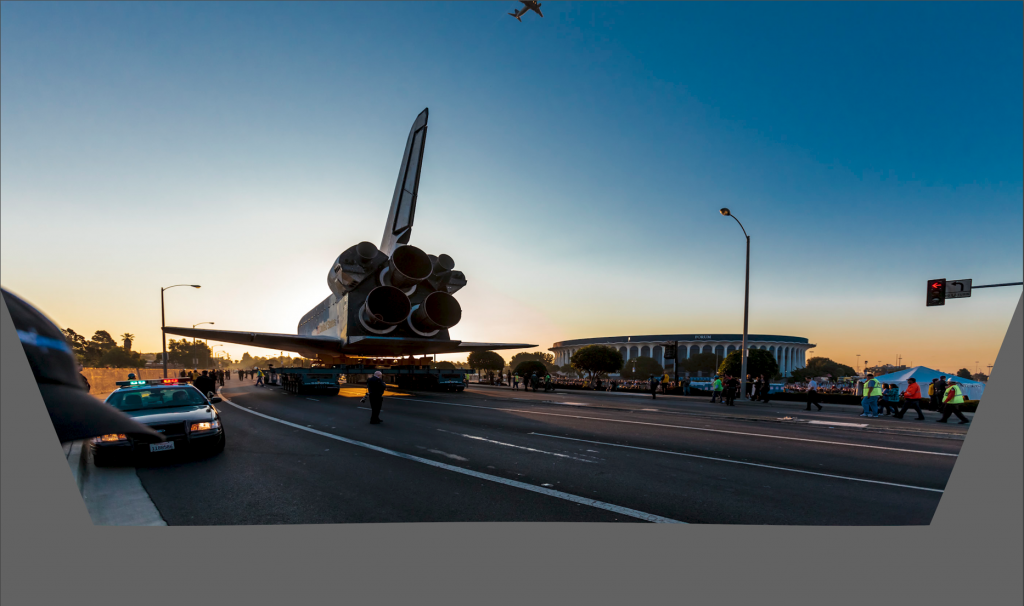 Per my usual protocol, I applied camera and lens profile corrections. And after adjusting for tone, color, clarity and the graduated filter, I was still not crazy with the amount of distortion. So I went to the Manual adjustment portion of the Lens Corrections tab in Lightroom and pulled the vertical slider to a -72:

Brought the file into CS6 to add clouds, move the plane down a bit and generally tone site specific areas that I felt still needed work. It was only later that I gave myself permission to remove the three poles. This IMHO really pushes the image into the beautiful and dynamic category. Success! 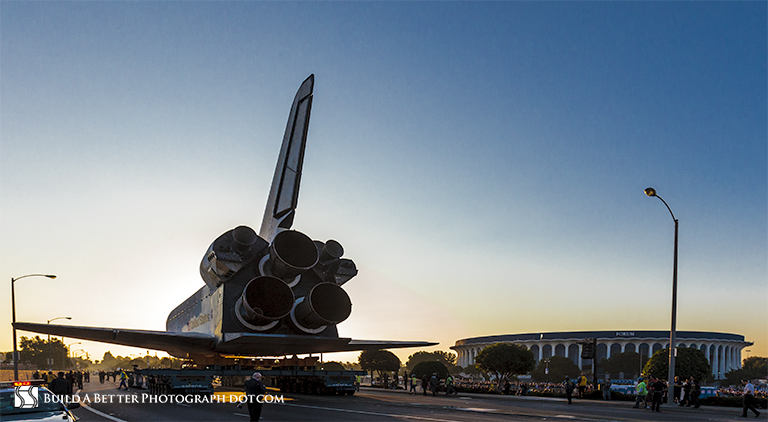 Your comments are questions are welcomed. 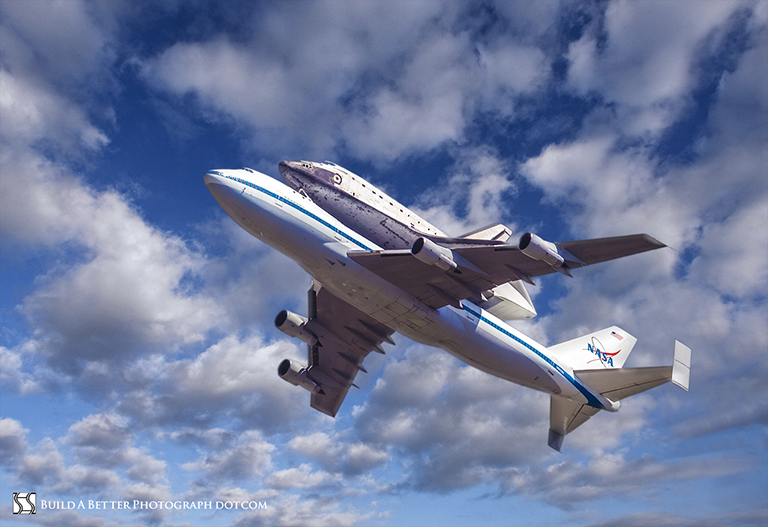 September 21, 2012……a day thousands of Angelenos will keep in their hearts and minds for a long time. Like a lot of other Californians, I spent a huge part of Friday hanging out with like minded others waiting for the shuttle Endeavor to fly by. My son and I chose as our vantage point a parking lot overlooking JPL. With the high elevation, open space, a ladder and long lens I’d be in an excellent position to capture a worthwhile moment. What I didn’t expect was the collective energy, conversations and good vibes that permeated the event. That made it fun while waiting around trying to keep my son, gear and self relatively cool.

There were tens of thousands of photographs made of this historic flight, people you might say, endeavored to capture the moment. The speed at which pics were posted to FB was phenomenal. Of course most of them were smartphone snaps with a few DSLR images thrown into the mix….and some were worthy of the day but most were just good old snappers.

And that was my intent….make a good recording while sharing the experience with my son and others. As I hung out at the site and saw hundreds of people taking pictures I realized I had to do better. I had to place my photograph into another category. After all, “I build photographs, I don’t take pictures.”

The idea for this post derives from my ability to lift mundane photography events, (subject access and lighting conditions) up a few notches. My process of building better photographs celebrates photography and what one can do with a pre-visualization routines and a passion for the art form. I absolutely love the process! 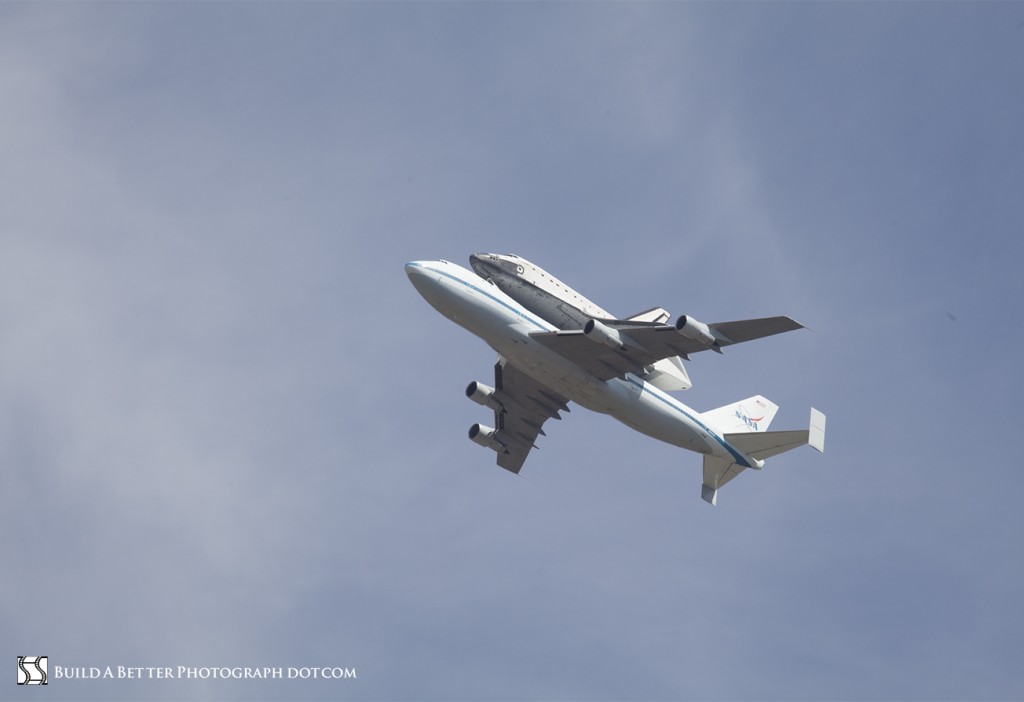 This image was chosen specifically for its’ focus and point of view. In ACR I added a neutral picture style, lens correction, cropping and general toning: 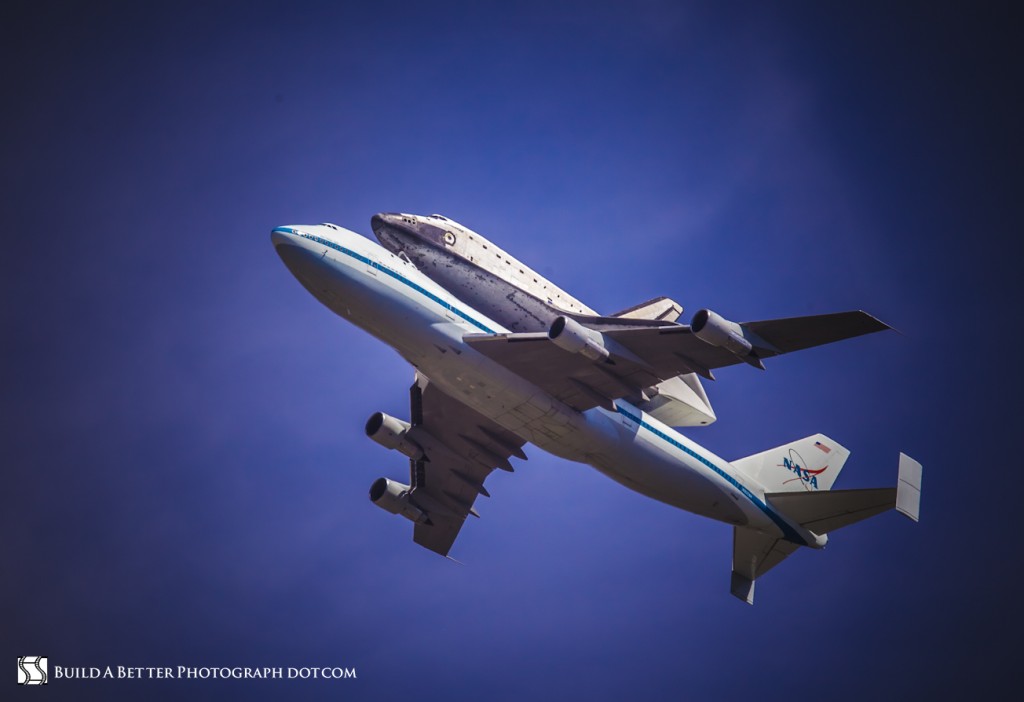 I was underwhelmed and spent about 30 minutes imagining how I might build on top of this terrific base image. I am a composite geek and try to put together images that serve my vision in the hopes that it appeals to others. So it was off to my Layer Cake Elements sky collection and there it was….the perfect cloud formation that matched the lighting and time of day. 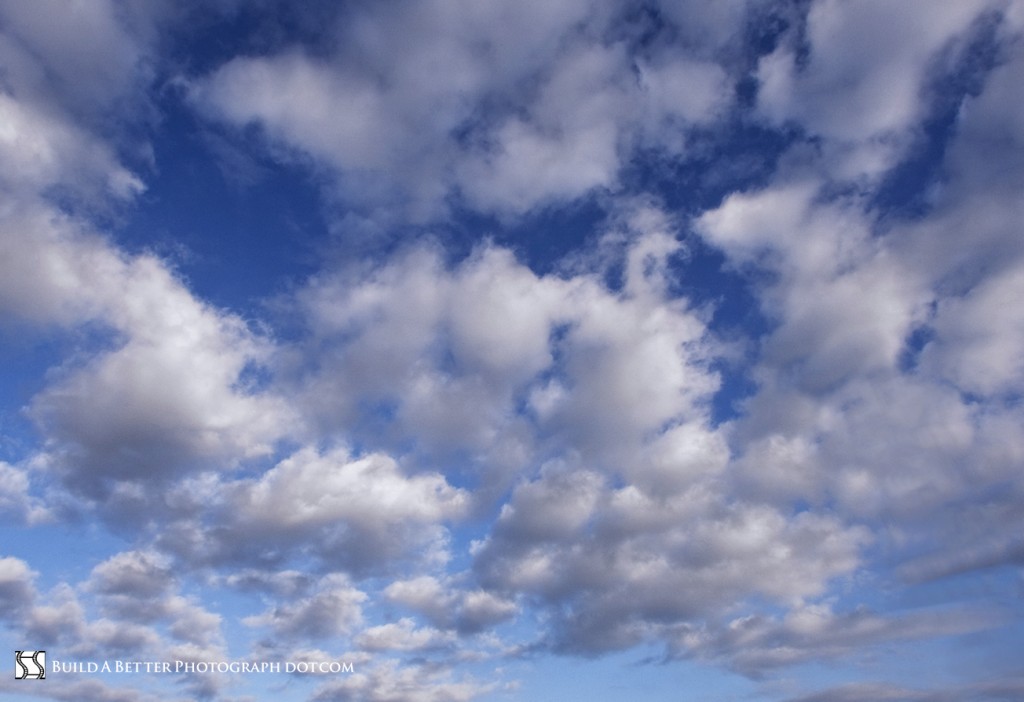 I went back and reprocessed the original RAW file into three new distinct files to ensure I had the sky coloring, subject coloring and contrast ratios needed for my vision of this image.

“A successful photograph is a series of small decisions made correctly.” This is my guiding philosophy for building better photographs. The planning for this shoot:

Because I wanted my camera to be as high as possible, I’d need a ladder. Check. I needed a cable release to minimize vibrations while shooting. Check. I made sure the tripod head was level so that when I panned with the Endeavor as it moved across the sky the horizon line remained level. Double check. I brought two liters of water and a chair. We ran out of water but a nice fellow who brought extra bottles and struck up a conversation with me gave us water from his stash. That was really great of him. Thanks Jim!

I brought an umbrella for shade but we had to park so far away and my son and I could only carry so much. I put the camera into position, worked out the camera settings and then put it away as it was way too hot to leave it in the sun. We waited over 90 minutes for the fly over and I wasn’t going to bake my gear in the process. That’s what the umbrella was for. Oh well you plan and execute as best you can.

No reason to kill yourself and shoot something like this in manual mode. In-camera reflective meters average whatever you point it at into 18% middle gray. They don’t see color, they see tonal values. A blue sky at the time of day the Endeavor flew over is always 18% gray. (if you remove the hue) I used Av exposure mode with the lens set to f/11. ISO 200. The shutter speed bounced around between 1/320 and 1/500 of a second. Evaluative was the metering mode. Auto focus was set to the center point. I always shoot using Canon’s Neutral picture style as I really like the flexibility I get once I’m in post.

The rest is a mixture of vision, taste and passion for the process. How long does it take to work on an image until it hits just the right emotional note? I work on it until it feels right. I’ve been at this long enough that I know when my vision has been realized with as little compromise as possible. And that’s when I finalize a piece.

Hope you’ve enjoyed reading this post. please pass along if you did.