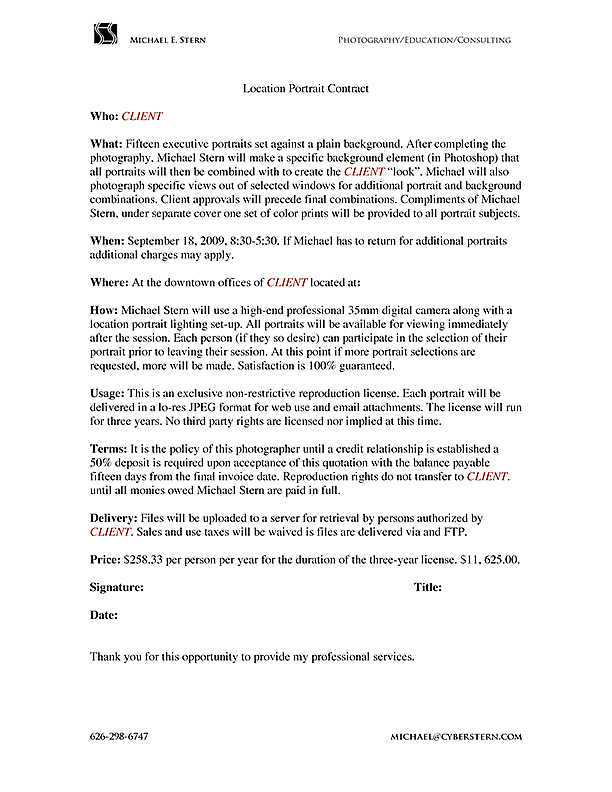 My final 2009 entry is about how I think about and use contracts. I was a member of APA (Advertising Photographers of America) for many years and the contract format they suggested we use was a sound tool (even if it was several pages long, filled with disclaimers and all manner of what you could and could not do with the photographers work) if you shot advertising and annual report work. A good thing for sure but way too much for my client-direct approach to business. Today (as well as throughout most of my career) I choose to work client-direct. Client-direct is not without its’ own issues but it’s the model I’ve made work since 1988.

Doing business client-direct cuts out some of the nonsense that goes on between agency, client and photographer; the politics and territory issues that inevitably come up with the agency-as-middleman-approach to preparing contracts and securing the job is eliminated. Their is however a lot less contract sophistication on the part of the client when there is no agency buffer in between.

This is my reasoning for developing the story-telling contract method. It is simple, direct and easy to comprehend. Perfect for my clientele. The example above is set up like so: Who, What, When, Where, How, Usage, Terms, Delivery and Price. I’m telling a story with my contract and this helps provide a comfort level throughout  my negotiations.

One of the most important aspects is the Usage and Terms sections of the contract. It is powerful and enforceable. I had to refer to these two clauses several years ago when a client I had coveted and solicited for five years finally came into the fold. After discussing the catalogue shoot, I presented this style of contract and it was signed by the company president. I inserted a clause stating that the balance of the monies owed was due COD. No problem. I shot the job. Again no problem. After the first part of the shoot, I edited and handed over some of the images so they could get started laying out the catalogue. When I had the rest of the shoot ready (one of my last film jobs), I called the general manager to let him know the balance of the job was ready to be picked up and to be sure to bring the “balance due” check with him. He then proceeded to inform me that the owner (not the president) had decided the advance check (50% deposit) was plenty for the job and she didn’t see any reason to pay me more.

I was a bit ticked off but kept my cool and said, “Per the contract signed by your president, the balance due is COD. Furthermore you are using my copyrighted materials right now in the pre-production stage of your catalogue without paying in full, another part of the contract your president agreed to in writing. Now if you don’t bring a check with you not only will you not receive the rest of the shoot but you are using my work without paying for it in full and the next conversation we’ll be having is through my lawyer.” I like to get straight to the point, saves time and can provide more leverage.

Within two hours he was at my office with a check. He was not happy but we talked and he agreed if those clauses were not in the contract it would have been way more ugly than it ended up being. For blog purposes I’ve simplified this particular event, but you get the idea.

When you work for yourself, you must think ahead, plan for the worst and hope for the best.